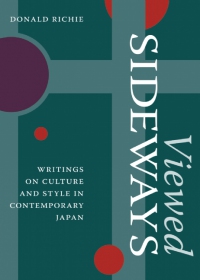 Whether you think you know Japan well or are an absolute beginner, you’re sure to both learn something new and be entertained by esteemed Japan scholar Donald Richie’s latest book of essays, Viewed Sideways: Writings on Culture and Style in Contemporary Japan, out now from Berkeley’s Stone Bridge Press. These 37 essays (including 26 anthologized for the first time) span 50 years, but all seem relevant and fresh in regards to 2011’s Japan.
Richie, who is a premier film critic, reviewer, novelist and essayist was born in Ohio in 1924 and has spent decades observing Japan, producing over 40 volumes of fiction and nonfiction, scores of essays and speeches, and hundreds of film, book and arts reviews. The writer Tom Wolfe has described him as “the Lafcadio Hearn of our time.”
The eclectic collection of writings in Viewed Sideways covers such diverse subject matter as Shinjuku sex shows, Kyogen drama, Japanese car culture, wasei eigo (Japanese/English), Buddhism, the fine art of pleasing and much more. Whether you read them in order or skip around, selecting those that strike your fancy, you’re sure to gain insight as well as probably recognize a thing or two that will give you many “yappari” (just as I thought) or “naru hodo” (now I see) moments
Richie is considered one of the world’s authorities on Japanese cinema and is an expert on the work of Yasujiro Ozu, one of my favorite filmmakers. I found particularly fascinating the seven essays in this collection about film, including the fine art of subtitling Japanese films (Richie is responsible for the English subtitles for the Akira Kurosawa films Kagemusha, Red Beard and Dreams). “All translation is a compromise,” he writes, “but I doubt that any translation is so thoroughly compromised as that of film dialogue subtitles. The translator is given only so much space and within it is supposed to render into writing spoken dialogue in the amount of time it takes to say it. This is impossible.”
Another fascinating point is when Richie recalls asking Japanese film director Shiro Toyoda why Japanese men were usually such poor actors and why Japanese women tended to be so much better. “He said it was only natural,” Richie writes. “The Japanese woman, from childhood, is forced to play a role. There are only three roles—those of daughter, wife and mother and she graduates from one to the other. From the earliest age she learns to mask her true feelings and to counterfeit what she does not feel. One of the results is that the Japanese woman is a consummate actress. Toyoda went on to say that he could take almost any female, put her up on the screen and she would do very well.”
Richie goes on to point out that women today in Japan are changing and growing and both their repertoire of social roles are expanding, which continues to help make some contemporary movies in Japan reflect these societal changes, and thus expanding Japanese cinema as well.
You’re sure to have your view of Japan enhanced by these elegantly written essays.
Get more info here on where you can purchase Viewed Sideways.
And visit the StoneBridge Press site for info on many wonderful books about Japan and Japanese culture.
Posted by Wendy Tokunaga at 3:07 PM