My Short Story, "Love Right on the Yesterday" 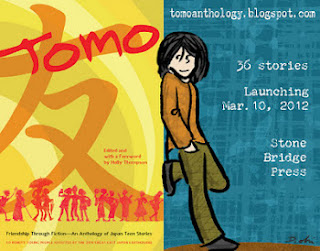 I'm so pleased that my short story, Love Right on the Yesterday about a Japanese teenager who longs to be an idol singer, was selected to be a part of Tomo: Friendship Through Fiction—An Anthology of Japan Teen Fiction edited by Holly Thompson.

Tomo will be published on March 10, 2012 and proceeds from all sales will go to organizations that are helping teens in the quake and tsunami hit areas. Tomo, which means friend in Japanese, aims to bring Japan stories to young adult readers worldwide as well as help support teens in Tohoku.

You can pre-order a copy of Tomo HERE. And you can read interviews with the contributors at the Tomo Blog Site.

But that's not all...I'm also thrilled that my story was selected to be published on YARN, the Young Adult Review Network, to give readers a sneak preview of Tomo. So I hope you'll check it out!
Posted by Wendy Tokunaga at 6:58 PM 6 comments:

How J-Drama "Marumo no Okite" Improves My Rusty Ear 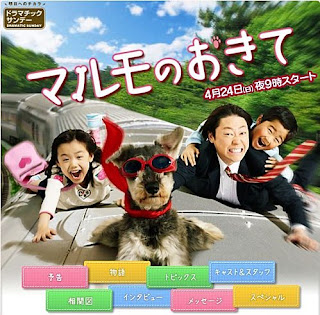 I’m dusting off the cobwebs of this blog and hoping to be more active again. I’ve got a lot going on in my crazy writing life, but will do my best to ganbarimasu!
Recently my husband granted me the wish of a subscription to TV Japan through Comcast Xfinity. Way back in the day when I was first studying Japanese (in the ancient times of no Internet and when VHS was the ultimate in high tech), I relied a lot on a local San Francisco station, Channel 26, that broadcasted Japanese programming mainly on weekends, to help with hearing real Japanese. There was a time when you could catch a wide variety of Japanese TV shows on Channel 26, some with English subtitles, and it was a great help in training my ear to Nihongo.
But as the years passed and the demographics in San Francisco started shifting, Channel 26 began to strip away its Japanese programming in favor of Mandarin and Cantonese language shows. The pickings became slim and with the advent of TV Japan, I now understand that many of the expats or temporary expats in the Bay Area weren’t watching Channel 26 anymore. And with the advent of TV Japan I’m assuming it was harder and harder for the station to attract Japanese sponsors.
With TV Japan I’m back on track and I can hear Japanese 24/7 if I want to. This helped tremendously when I found myself in Osaka last month, my first time visiting Japan in more than five years and by far my longest break from one of my favorite places in the world. My ear wasn’t as rusty as it usually is and I also felt “in tune” with Japan since I was much more aware of what was going on, thanks to steady viewing of TV Japan at home.
I want to urge those of you studying Japanese to try and immerse yourself in the language as best you can. And these days with the Internet, DVDs, cable TV, etc., etc. there’s really no excuse—even if you live thousands of miles away from Tokyo you can still get an earful.
One of the best ways to improve your Japanese, I think, is by watching Japanese TV dramas. On TV Japan I’ve been watching one called Marumo no Okite. TV Japan mostly shows up-to-the-minute NHK shows, but has recently started offering other programming. Marumo no Okite originally aired on Fuji TV last spring, but it’s new to me so I don’t mind if it’s a bit old.
If Marumo no Okite were an American TV show, I wouldn’t watch any more than five minutes of it. It’s sappy and sentimental, about a young salaryman (Sadao Abe) who unexpectedly must take in his old baseball team buddy’s two kids when the friend dies suddenly. The children (Mana Ashida and Fuku Suzuki) are precocious and much too perfect (though they don’t mug for the camera as much as some American child stars) and there’s also a talking dog. Sheesh!
But I’m not expecting Downton Abbey here. I like that Marumo is predictable and sentimental and repetitive because that makes it much easier to understand when you don’t have any English subtitles on which to rely (another good strategy to help you improve). It’s also good to notice how the Japanese changes when a character is talking to his family, to his boss, to his customer and to a stranger. If you observe enough, you’re bound to pick up a lot. And if you find yourself understanding everything Mook the talking dog says you can reward yourself with a treat!
Wendy Nelson Tokunaga is the author of the novels, “Midori by Moonlight” and “Love in Translation” (both published by St. Martin’s Press), and the e-book novel, “Falling Uphill,” written under the pen name Kelly Sweetwood. She’s also the author of the nonfiction e-book, “Marriage in Translation: Foreign Wife, Japanese Husband.” Her short story, “Love Right on the Yesterday” appears in the upcoming book, “Tomo: Friendship Through Fiction: An Anthology of Teen Stories.”
Wendy holds an MFA in Creative Writing from University of San Francisco and teaches for Stanford University’s Online Writer’s Studio and for the MFA program at University of San Francisco. She also does private manuscript consulting for novels and memoirs. When she’s not busy writing, Wendy loves to sing jazz and Japanese karaoke with her Osaka-born surfer-dude husband accompanying her on keyboards. Follow her on Twitter at Wendy_Tokunaga and visit her website at: www.WendyTokunaga.com
Posted by Wendy Tokunaga at 1:47 PM 7 comments: