I visited the new New People mall in San Francisco’s Japantown a few days after its grand opening the weekend of August 16. For as long as I can remember, I’ve been a sucker for Japantown’s, Little Tokyo’s, Japanese malls, stores, urants, etc. located anywhere outside of Japan. I’ve found them in Paris (in the Opera district) and Dusseldorf and in more typical places like Seattle, Los Angeles, Orange County, New York City, San Jose, San Mateo and, of course, my hometown of San Francisco. 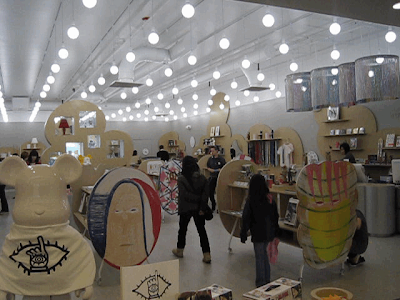 San Francisco’s Japantown stood in for Japan for me before I ever traveled abroad and I made the best of I could of it, enjoying the only Japanese bookstore for miles around (Kinokuniya) and my first tastes of sushi and udon at Toraya, which is still in business and happens to be right next door to New People.

But I tend to get over-excited about these things and my expectations run high. And when I heard about New People I figured that finally we’d be getting something that you actually might encounter in Tokyo or Osaka. And by looking at the physical structure, it does look like it would fit right in, though any kind of center like this in Tokyo would probably have at least five more floors (I envisioned something like 109 in Shibuya, but then, as I said, I’m a dreamer). And it boasts a hip design and is all shiny and new.

There’s supposed to be a cafe and I guess you could call it that, but it’s really just the concession stand for the movie theater (albeit with bento boxes from Delica and Blue Bottle Coffee). Again, I envisioned something like the very pleasant and cool cafe at Kinokuniya in Manhattan that has its own space and actual seating.

The flagship New People store sells books, DVDs, toys, trinkets, etc. that are largely anime and manga related. It’s a nice airy space, but it struck me that the merchandise wasn’t too different from what you can buy at Kinokuniya or several of the other gift stores in the Japantown mall.

On the next floor are two clothing stores and the footwear shop Sou-Sou. This floor feels empty and maybe there will be additions in the future, but it felt unfinished. The clothing, unlike the variety you would find in La Foret in Harajuku or the aforementioned 109 in Shibuya, is of the extreme niche variety favored by some anime fans—mainly frilly Lolita Goth. This is fine, but it would be great to see all kinds of Japanese fashion represented at New People. There is also a museum in the complex, but it was “closed for repairs” the day I was there so I can’t comment on it.

And there is a movie theater, which is a welcome addition to Japantown, which long ago lost the Kokusai Theater to a Denny’s. The Kabuki Sundance theaters do host the Asian Film Festival but they don’t show first-run Japanese movies very often. It looks as though the New People cinema won’t only be showing anime and will embrace other types of Japanese film and that’s a good thing.

All in all I am glad to see that there is anything new in Japantown, but New People, at least at this point, is kind of a disappointment. Perhaps it will expand and grow in the future and I do wish it well. But it caters more toward the more narrow American anime/manga fan view of what Japanese pop culture is, which isn’t surprising since the vision is from the head of the Viz Media empire.

Ironically, a branch of the Japanese “livingware” supplier, Daiso, has recently opened in Japantown. Daiso is famous for its 100-yen shops in Japan and has nine stores in the U.S. It should tell you something that the biggest branch is in Union City and that one of the last places it opened was in Japantown. Japantown does not attract many Japanese expats because so many of them live in the South Bay and this is also why some of the best, most authentic Japanese restaurants are south of San Francisco. And this is why sometimes when I’m at Curry House in Cupertino I feel more like I’m in Japan than when I’m visiting Japantown.  Walking through the latest branch of Daiso, with 99 percent of the products made in China, but designed with the Japanese sensibility I first fell in love with in Tokyo years ago, it struck me that this is what evokes the real Japan to me much more than New People.
Posted by Wendy Tokunaga at 10:10 AM