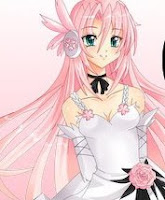 It’s official. Japan is no longer the dominant exporter of electronics and cars, but of its popular culture. Despite the economic downturn, conventions promoting Japanese pop culture are making more money than ever. Ronald Kelts, author of Japanamerica: How Japanese Pop Culture Has Invaded the U.S., reports in the Daily Yomiuri that Seattle’s Sakura-con boasted 20,000 attendees, thereby bringing in about $13 million into the city’s economy, with restaurants and hotels enjoying booming business. And Scotland’s Sunday Herald chimes in, pointing to the incredible rise of manga.

I’m still waiting for J-pop music to become more internationally mainstream, but I knew I was onto something when I became obsessed with Japanese pop culture from way back in the day.
Posted by Wendy Tokunaga at 8:41 AM