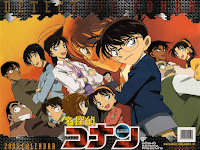 The Straits Times reports a rather cool development, with Japan’s Prime Minister utilizing “manga diplomacy” on his nascent state visit to Beijing to meet with Chinese Premier Wen Jiabao. Prior to his meeting with the premier, Aso met with Chinese students studying Japanese and also viewed the “Detective Conan” anime (pictured), which the students had helped dub into Mandarin. Apparently Aso has referred to himself as an otaku and a dai-fan of manga. He also met with the Chinese winner of an international manga contest he had set up in 2007 while in his role as foreign minister.

This also comes at the time where UPI Asia Online reports that Japan is hoping to increase tourism by 25 percent in 2010 and, hopefully, giving a boost to its economy. Part of the strategy will be to attract tourists who are interested in the country’s pop culture, including anime, games, and manga.

I think some enterprising gaijin living in Japan might be able to do some good business by hosting tours for foreigners interested in pop culture and making it easier to get around Japan. Take them to a J-pop concert, to Akihabara, and to Ghibli anime museum and the Osamu Tezuka manga museum.

I’ve never really been to Japan as a tourist and by the time I visited there (and eventually lived there) I had studied Japanese and knew a fair amount about the culture. People always ask me what it would be like to travel in Japan and, frankly, if you don’t know the language, I don’t think it would be very easy. Maybe that’s why Japan only currently gets a little over 8 million visitors annually. The country, with new campaigns in mind, would like to see that number reach 10 million by 2010 and 20 million by 2020.