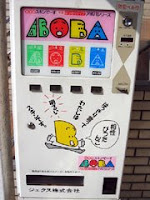 The Associated Press has reported that in 2008, four of the top-selling books in Japan concerned how blood type determines personality. Blood type in Japan is like horoscopes here (and they are popular in Japan as well). I do admit to believing in horoscopes, especially when they say something flattering about my personality or that a convergence of planets will bring good fortune to my bank account. And grouping peoples’ personalities by date of birth in roughly 30-day increments seems somewhat plausible, though I know there’s much more to it than that. But basing personality on only four blood types? That seems a bit farfetched.

In Japan dating agencies offer compatibility tests based on blood types and some kindergartners are even divided up in their classes based on B, A, O, or AB. Purchasers of condoms in vending machines can also choose according to their blood type. Prime Minister Aso saw fit to state on his official Internet profile that he is A. There is also a term for blood type harassment, bura-hara.

Now I find that there was a reason to feel a bit creepy about all this blood type business. Turns out Japan’s 1930s militarist government imported this theory from Nazi race ideology in order to breed better soldiers. This idea was later put to rest and the blood type craze went into decline until the 1970s when new books popped up promoting the theory as a way to foster one’s best talents and make for better relationships--much like horoscopes--instead of a way to judge or rank others.

The books that are so popular today claim that blood types are not definitive, and are only an indicator of personality tendencies. The practice, however, is so widespread that despite repeated warnings, many employers still will ask an applicant’s blood type during job interviews, oblivious that it could lead to discrimination.
Posted by Wendy Tokunaga at 10:57 AM