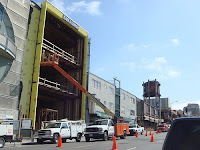 The Black Ship reports that Japan’s Cultural Affairs Agency will construct a 10,000-square meter art center in Tokyo that will promote Japanese manga, anime and game software. With an opening scheduled in two to three years, the hope is that the center will become a major tourist attraction for foreign visitors as well as a booster for the country’s pop art industries. No decision has been made yet on the location, but Odaiba is a possibility.

This announcement comes at the same time as the construction of the 20,000 square foot NEW PEOPLE destination spot building at 1746 Post Street (pictured) in San Francisco’s Japantown, which aims to celebrate, preserve and foster Japanese pop culture. I guess I have to be thankful that VIZ Media is headquartered in my hometown of San Francisco because this center could have easily popped up in Los Angeles or New York. It is the brainchild of Seiji Horibuchi, the VIZ CEO, and $15 million has been invested in it so far. The plan is to eventually expand globally.

NEW PEOPLE will include a cinema specializing in Japanese film, a cafe, various Harajuku-type shops, and an art gallery. It opens on August 15 and I can’t wait!
Posted by Wendy Tokunaga at 7:50 PM