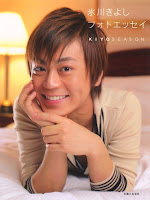 Japan is a land of extreme trends and buzz words that can overtake the country in minutes and just as quickly disappear to make way for the next. But this is an interesting one and I think I even mentioned a reference to this syndrome in a previous post. The Japan Times documents a new trend that has culminated in a report from the Infinity market-research company called, “Herbivorous Ladylike Men Are Changing Japan” (Soshokukei Danshi Ojo-man Ga Nippon wo Kareu).

Exaggerated? Most probably. But ever since I first was in Japan I was struck by how there seemed to be no stigma against the gentler, more “feminine” man. I remember hearing complaints from Western women viewers of the Toni Collette movie Japanese Story (2003) such that they couldn’t understand the appeal of male lead Gotaro Tsunashima because he was “too feminine.” He was just a regular cute Japanese guy to me and I thought he was perfect for the role. The big, muscular, football player types that so many American women seem to go for never appealed to me. While Japan certainly has its more “masculine” movie and pop stars, there are certainly just as many ojo-men from which to choose.

Of course, sociologically, if this trend is true along with the trend of women purposely remaining unmarried and without kids, then the land of the rising sun is due to become a lot less crowded in the coming generations. But it could also point to a growing tolerance toward less strict gender roles for both sexes.
Posted by Wendy Tokunaga at 10:45 AM